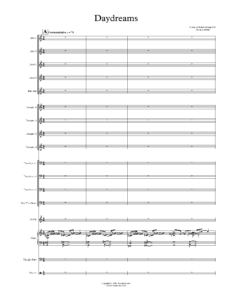 Daydreams is a programmatic work—the piece should sound like a daydream. This is achieved through its melodies and textures. Each section represents a different thought, just as the mind wanders and drifts through one’s imagination. The various themes may seem incongruous at first, but they eventually converge, one being played on top of the other. The dream then fades away….

I composed Daydreams in an unconventional manner. It was written with an orchestral mindset. Consequently, some instruments may be filling unusual roles. To this end, each musician must be confident, deliberate, and musical. The piece is filled with dense writing, so intonation is also paramount. Most importantly, the work should reach its emotional peak at letter L, during which all the motives overlap.