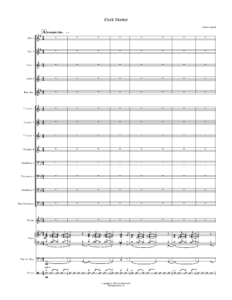 Dark matter was first postulated to exist in the 1930s; however, this early evidence was not given much credence. It was not until the 1980s that dark matter began to make its foothold in the standard cosmological model. Astronomers have measured all of the observable mass and energy in the universe to an incredible degree of accuracy. They also know how much to expect, by observing gravity’s effect on galaxies and galaxy clusters. These observations have yielded an astounding result—about 95% of the expected matter is missing. This has been confirmed time and time again by independent calculations. All of this has led scientists to an inevitable conclusion: most of our universe is composed of matter we cannot see or detect. That is, dark matter.

My composition truly personifies dark matter—a substance about which we know nothing, but almost undeniably know exists. It is shrouded in mystery and confusion; it is the unknown. I captured the intangible nature of dark matter by writing in a very chromatic, almost atonal style. It alludes to key centers, yet never quite elucidates.

It begins rather innocuously with a simple vamp figure. Trombones later join in, followed by a snaky melody. In time, the full band adds in with hits and countermelodies, all of which weave in and out of one another. The solo section is the heart of the matter—no time, no key, no rules; what happens here is entirely unknown. Eventually, the vamp figure begins again, bringing time along with it. The background figures are unconventional: trombones gliss freely, trumpets play clusters, and saxes flutter chromatically.